I’ve noticed for years that the banking establishment at which I bank also houses a Fallout shelter. When I drive by I wonder what is that all about? What’s down there? Food? Water? Beds? Medical supplies? Masks? Well I could ask or better yet I could ask for a tour! I assumed they would say no. I imagined Banks have all sorts of rules about where clients may go. Locked doors, cameras, etc. But I would make the request anyway. 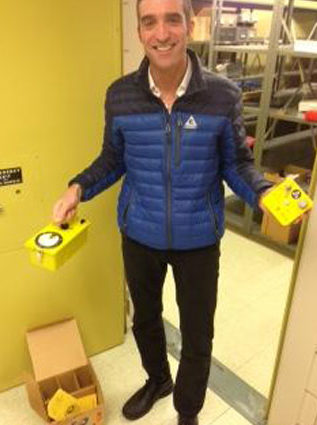 I went into the bank, made a deposit and the teller asked me, “Is there anything else I can help you with?” To which I answered,
“Well yes. I would like to tour the fall out shelter is that possible?”
She looked at me blankly and asked me what I had just said.
“The fall out shelter. I believe there is one below us. May I tour it?”
She appeared puzzled and requested the manager. I again made my request to the manager and she began laughing. She said that in her 15 years at the bank no one had ever asked to see the Fall Out shelter but that if I really wanted to see it I could return in a couple hours and she would give me the tour. Well I sure did want to and so I returned a couple hours later for the tour. Check out this photo from the tour. I am holding actual decades old radiation detection devices! Decades old, unused and right out of the box. The space was nothing like it used to be. It used to house cots, medical supplies, canned goods etc. There was only one bed down there now and lots of storage racks but mostly empty now. A few boxes which contained the radiation equipment and that was about it. Still cool to see and hopefully we’ll never need the space for what it was intended. Thanks Terri and Sarah for being willing to provide the tour! It certainly made for a unique visit to the bank.